According to the Asthma and Allergy Foundation of America, over 24 million Americans suffer from allergic rhinitis or "hay fever." It can sometimes become difficult to figure out if you are one of the many that may have hay fever and what you can do to suppress symptoms. Here are a few tips on what you can do during hay fever season.

What is hay fever?

Hay fever, also called allergic rhinitis, causes cold-like symptoms. These may include a runny nose, itchy eyes, congestion, sneezing and sinus pressure. But unlike a cold, hay fever isn't caused by a virus. Hay fever occurs when your immune system identifies harmless airborne substances as harmful which then causes your immune system to produce unessential antibodies to this harmless substance. These antibodies signal your immune system to release chemicals such as histamine into your bloodstream, causing a reaction that leads to the signs and symptoms of hay fever.

When is hay fever season?

What is the difference between hay fever and allergies?

Allergy is a broad term that encompasses all. An allergy is when your body overreacts to a foreign substance, while hay fever is a specific type of chronic allergic reaction.

For example, an allergy can be anything from pollen, food, mold, insects, pet dander, etc.

While hay fever typically is environmental allergens such as tree pollen, grass pollen, weeds as well as pet hair, dust, mold or even cigarette smoke, perfume.

How long can hay fever last?

Hay fever can last as long as you're exposed to the allergens, which can be days, weeks or even months.

Why is it called hay fever?

Hay fever is called allergic rhinitis because it causes cold-like signs and symptoms. But unlike a cold, hay fever isn't caused by a virus, and although the word “fever” is in the name, hay fever or allergies very rarely cause fever. If a fever is present along with allergy symptoms, it can usually be attributed to the common cold or a virus.

What does hay fever feel like? Symptoms of hay fever?

If you suffer from seasonal hay fever, your hay fever signs and symptoms may occur year-round or may start or worsen at a particular time of year .

Trees are the first plants to begin their mating process  (which, after all, is what pollen is all about), releasing their pollen in late winter and early spring:

While there are hundreds of types of grasses, only a few cause allergy symptoms. Grass pollination season begins in late spring and peaks in summer:

Weed season is typically the shortest allergy season, but some say it can be the worst pollen season. Weeds begin pollinating in late August to mid-October:

Symptoms also may be triggered by common irritants such as:

Problems that may go along with hay fever include:

Hay fever can create many complications to those throughout allergy season, which is why we recommend coming in to see an allergist and getting your allergies treated!

Managing pollen allergies is a multi-step process, and patients need to be actively involved in their care. Along with visiting your primary care doctor or allergist and taking medication as prescribed, it's important to find ways to reduce your exposure to pollen.

Over-the-counter and prescription allergy medications, including antihistamines and anti-inflammatory nasal sprays, can help relieve symptoms. If you know you know your pollen allergies are worse in early spring, start taking your allergy medications two weeks before symptoms are at their worst. Talk with your doctor about which medication is best for you. Pre-medicate with an antihistamine and/or corticosteroid  nasal nasal spray 2 hours prior to an anticipated allergen exposure. For eye allergies, use eye drops as needed.

Many people — especially children — get used to hay fever symptoms, so they might not seek treatment until the symptoms become severe. But getting the right treatment might offer relief.

Allergy Shots (Immunotherapy): Works by injecting a small amount of the allergen into the body and gradually increasing the amount over time. This allows the body to become familiar with the allergen and train the immune system to not overreact over time. This procedure is done in the clinic either weekly or bi-weekly. These are a great option for patients who like a routine!

Allergy Drops (Sublingual Immunotherapy): Allergy drops are great for those who are on the go, and have busy schedules. Drops are to be taken under the tongue and work in the same way as shots, slowly introducing the body to the allergen. These are convenient, affordable, and kids love them!

Hay fever is something that is hard to live with, it causes a lot of stress and pain on the body, which can truly affect your quality of life. It’s time to put an end to the suffering and get treated for your allergies. Book your appointment today!

Download Your FREE Copy of Our Allergy Drops E-Book 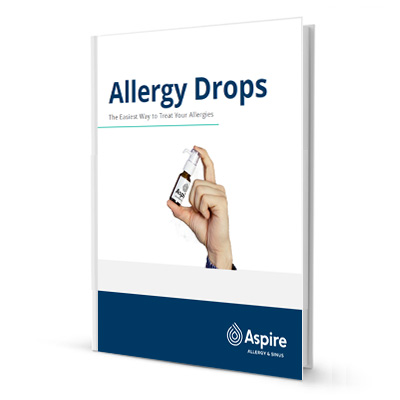 All You Need To Know About Cottonwood Allergies

Am I Allergic to My Christmas Tree?

6 Things to Know About Winter Allergies